“Industrialization” was the central theme of the Five-Year Economic Plans that started in 1962. The initial version of the first Plan (1962-1966) assigned 34 percent of gross investment to mining and manufacturing (Eun-bok Lee, 1986, pp.777-778). The revised version (1964) declared the Korean government’s ambition to modernize the industrial sector and enhance its international competitiveness by rapidly expanding key industries (cement, fertilizer, industrial machinery, oil refinery and others), fostering related industries, and promoting new export and import-substitution industries.

The government also made considerable efforts to alleviate shortages in economic infrastructure. Electric power development projects were carried out from 1962 and the supply of electric power came to exceed demand in the mid-1960s. Road construction also succeeded in easing transport difficulties with the completion of major expressways. The Seoul-Incheon, Seoul-Busan and Honam Expressways were opened in 1968, 1970 and 1973, respectively.

A full-scale drive toward HCIs began in 1973. On January 1st, Park Chung-hee stated in his New Year’s press conference that “the government is announcing the HCI project to promote HCIs. To achieve a 10 billion dollar target of annual exports by the early 1980s, the share of HCIs in total exports should be raised to well over 50 percent. From now on, the government will accelerate the promotion of HCIs such as steel, shipbuilding and petrochemical industries, and thereby increase their exports (Yeong-koo Park, 2005, p.406).” The HCI Drive Committee was organized shortly after, and the Committee presented the HCI Drive Plan in June. Targets were set to achieve per capita income of 1,000 dollars and annual exports of 10 billion dollars. Through industrial deepening and export mix upgrading, the share of HCIs in total industrial production was to be raised from 35 to 51 percent between 1972 and 1981, and their share in total exports from 27 to 65 percent. For this purpose, six strategic industries－steel, nonferrous metal, machinery, shipbuilding, electronics, and chemical engineering－were selected. The Plan was revised slightly in the fourth Five-Year Economic Plan (1977-1981) prepared after the first oil shock, but in most part, it was pursued with great consistency until the Comprehensive Economic Stabilization Program was introduced in April 1979.

Various reasons have been suggested for the adoption of the HCI drive (Choong Yong Ahn and Joo-Hoon Kim, 1995, p.329). First, the government felt the urgent need to strengthen its self-defense capacity by building adefense industry. Concerns about national security grew as North Korea’s military provocations increased in frequency toward the end of the 1960s. Furthermore, the American government announced in 1968 that its ground troops would be gradually pulled out of Korea in 1971-1975. Second, it was considered necessary to upgrade the industrial structure and find new export industries to maintain a safe lead over newly industrializing countries. Policymakers thought that HCIs would provide new sources of growth.

Perhaps the most important of these were the credit programs. By controlling the financial sector, the government could supply vast amount of directed credits with low interest rates and share investment risk with private enterprises. The National Investment Fund (NIF), established in 1974, played an important role in this regard. Banks, insurance companies and public funds were required to lend a certain portion of their funds to NIF.1) The NIF lent these funds in turn to financial institutions at low interest rates (5 percentage points below the rates on general long-term bank credits on average before 1982) for very long periods (8-10 years in some cases). In 1974-1991, 80 percent of the lending was assigned to specialized banks (including development banks), 17 percent to commercial banks, and 3 percent to regional banks. In 1974-1981, 62 percent of NIF lending was assigned to KDB, and the NIF accounted for 57 percent of total equipment loans by financial institutions. This share reached 70 percent in the late 1970s, when big industrial complexes were being built around the country. 2) 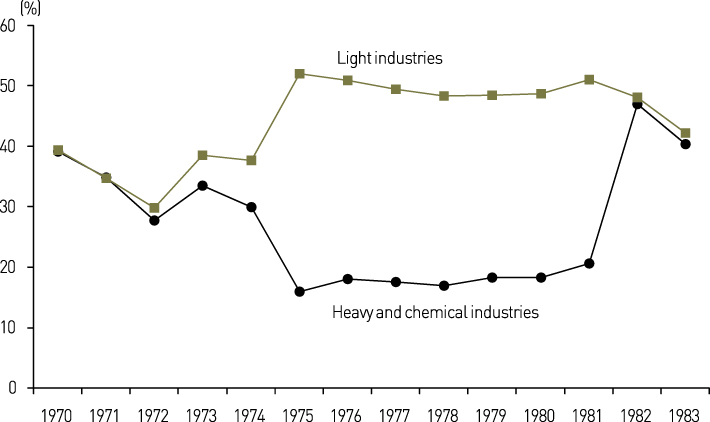 On top of directed credits, various tax incentives were offered to HCIs. Tae-won Kwack (1985) estimated the marginal effective tax rates of HCIs to be 30-35 percentage points lower than those of light industries during the height of the HCI drive (Figure 2-3).

Also notable were public-sector R&D activities. The total of public and private R&D spending remained below 0.5 percent of GDP throughout the 1970s, far below the current level of around 3 percent (Figure 2-4). The public sector played a leading role in those years, accounting for 50-70 percent of total R&D spending. The government launched many research institutions whose mission was to import advanced foreign technologies, modify them to suit local needs, and disseminate the results. 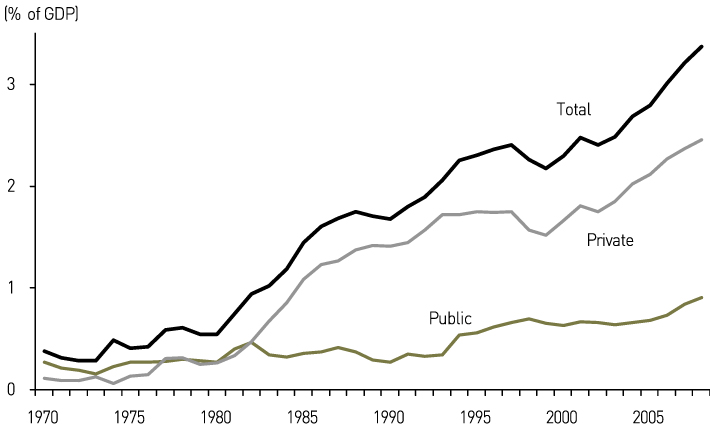 Yeong-koo Park (2005) summarizes the characteristics of the HCI drive in the following way. First, it had a clear export orientation, going beyond import-substitution industrialization. Its primary goal, as stated by President Park in his New Year’s press conference, was to increase total annual exports to 10 billion dollars. Such export orientation exposed domestic firms to international competition, forcing them to constantly improve productivity.

Second, the government led the drive but left actual implementation to the private sector. In most cases, the government confined its role to providing financial and tax incentives to large private enterprises such as Samsung and Hyundai, and refrained from direct participation in industrial production. This distinguished Korea’s strategy from those of other developing countries at the time. 3)

Third, the HCI drive took demand conditions and government budget constraints into full consideration. Priority was given to finished goods production, and then went upstream to intermediate inputs and raw materials. Even in the case of the defense industry, 80 percent of the capacity was allocated to the production of civilian goods in order to maximize capacity utilization. The HCI Drive Plan specified funding requirements for each project, and care was taken not to exceed the budget ceiling.

The HCI drive, however, was not always planned and implemented with care. Yung Bong Kim (2003) observes that “given the haste with which the HCI Drive Plan was prepared, it is extremely unlikely that economic benefits of individual investment projects were carefully evaluated.” In implementing the Plan, “the detailed targets and modes of individual projects were often determined through bargains between politicians, bureaucrats and businessmen, with bureaucrats selecting the firms to benefit from the projects.” If this observation was true, there must have occurred no small degree of inefficiencies in implementing the Plan.

Different authors have expressed different views on the success or failure of the HCI drive. On one side are those who believe that it was mostly afailure. Indeed, the HCI drive produced excess capacity. In 1975-1980, capacity utilization in machinery, electrical instruments and transportation equipment was around 50 percent, well below the average capacity utilization of over 70 percent in total manufacturing (Table 2-3). This indicates the existence of inefficiencies in resource allocation. Jungho Yoo (1991) shows that HCIs exhibited a very low capital efficiency compared to light industries, and claims that the HCI drive retarded overall output growth. Jong-Wha Lee (1996) finds no correlation between industrial policies, such as tax incentives and subsidized credit, and total factor productivity growth in the promoted sectors. He further shows that trade protection reduced growth rates of labor productivity and total factor productivity.

The HCI drive has also been criticized for its negative impact on other aspects of the national economy. Large amounts of policy lending led to the unhealthy accumulation of debts by enterprises. Acting as vehicles for the HCI drive, the chaebol further increased their economic power. Excessive monetary expansion produced chronic inflation. Most importantly, financial repression obstructed the development of acompetitive financial sector and increased the inefficiency in financial intermediation.

On the other hand, some authors argue the HCI drive should be evaluated from the perspective of a dynamic comparative advantage. 4) According to them, Korea could make full use of the “three lows” 5) in the mid-1980s because of the industrial base built during the HCI drive, which provided an opportunity to deepen industrial structures and upgrade the export mix.

It is difficult to assess the impact of HCI drive on Korea’s growth path because of our limited ability to construct counterfactuals. International comparisons, however, provide some clues. Radelet, Sachs and Lee (1997), after reviewing the different paths taken by East and Southeast Asian countries (Korea, Taiwan, Hong Kong, Singapore, Thailand, Malaysia, China and Indonesia), concluded that “while the promotion of heavy industry may have been beneficial in some identifiable cases, it surely was not the common denominator that accounts for the rapid growth across East and Southeast Asia. Instead, the common denominator was manufactured exports, supported by aregime best characterized as free trade for exporters. The varied experiences of the countries of East and Southeast Asia indicate that both an open market and a more interventionist approach that offsets other distortions can be made to work, as long as manufacturers face the acid test of operating on world markets, both for imported inputs and exports. East Asia’s successful industrial policy strategy was to support labor-intensive manufactured exports, not capital-intensive heavy industries (emphases by the original authors).”

From this perspective, Korea’s favorable growth performance was due to its export orientation taken since the 1960s rather than the HCI drive itself. Of course, without definite proof for or against the effectiveness of the HCI drive, the debate will continue.

1) To lend to NIF, banks set aside 10-30 percent of the increase in deposits, insurance companies 40-50 percent of total premium collection, and public funds (such as pension funds for teachers and civil servants) 90 percent of their idle cash. In 1974-1979, these sources accounted for 74, 14 and 12 percent, respectively, of NIF funding (Joon-kyung Kim, 1993, pp.162-163).
2) In 1982, interest subsidies on policy loans were abolished. At the same time, the share of KDB in NIF re-lending began to decline while those of the Export and Import Bank and other specialized banks began to rise.
3) Since 1973, the Taiwanese government also stressed the promotion of three HCIs－steel, petrochemical and shipbuilding industries. Unlike in Korea, however, state-owned enterprises played the main role in implementation.
4) See Pack and Saggi (2006) for the discussion on dynamic comparative advantage and their criticism of this concept
5) The “three lows”refer to low oil prices, low international interest rates, and the low value of the dollar (with which the won moved closely) against the Japanese yen.