As the new president, Park proclaimed that economic development would be the central agenda of his administration (Soon Cho, 1991, pp.175-177). He and his aides understood the importance of economic success in legitimizing their forceful seizure of power. Their ideological orientation was far from afree market economic model and they made many mistakes. 1) Still, they managed to adopt active export promotion and this later turned out to be the most important reason for their success

Initially, export promotion was pursued in response to the rapid depletion of foreign exchange reserves (Sang-cheol Lee, 2005, p.394). The reserves began to decline in March 1962 due to the large repayment of short-term commercial loans raised in 1961 and 1962 to finance the first Five-Year Economic Development Plan (1962-1966). 2) Faced with the specter of aforeign exchange crisis, the government introduced various measures. In January 1963, the export-import link system was introduced to give exporters the right to import foreign goods equal to the full amount of exports.

In the meantime, exports began to grow rapidly following the two rounds of devaluation in February and October of 1960. 3) Starting with a66 percent growth in 1960, exports increased by 43 percent ayear up to 1964. Bolstered by the success, the government started more serious efforts to promote exports in 1964-1965. First, anew exchange rate regime was announced in May 1964. Multiple fixed rates were consolidated into asingle variable rate, and the won was devalued by almost half from 130 to 255 won per dollar. The real exchange rate has maintained acompetitive and stable level since then. Figure 2-1 shows the won/dollar real exchange rate and the won’s real effective exchange rate over the past decades, and compares them to the dollar’s performance. 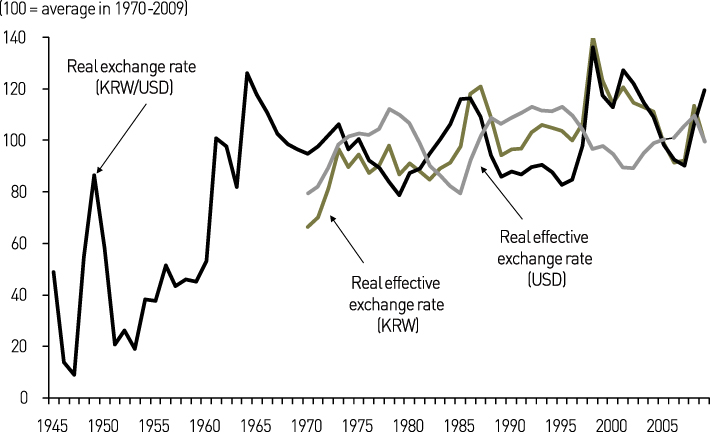 At the same time, the government phased out various ad hoc export subsidies and the export-import link system, and established acomprehensive and consistent export incentive mechanism (Kwang Suk Kim, 1994, p.322; Choong Yong Ahn and Joo-Hoon Kim 1995, p.324). Key measures were (1) export credits that were automatically extended to exporters who turned in letters of credit and (2) tariff exemptions on imports of intermediate inputs. 4) Of particular importance were the export credits, whose share in total bank credit rose from 4.5 percent in 1961-1965 to 7.6 percent in 1966-1972 and then to 13.3 percent in 1973-1981 (Table 2-2). The interest rate on export credits was kept at low levels, and the gap with the general interest rate reached 17 percentage points during the high-interest rate period of 1966-1972.

These incentives were augmented by administrative measures. First, atarget was set for each year’s total exports by adding up the export forecasts of individual firms. This practice was often called“export targeting.” Second, Monthly Export Promotion Meetings were held, where government officials and business representatives gathered to monitor export performance, compared it to export targets, identified problems, and sought solutions. The president himself chaired the meetings. Third, the Korea Traders Association and the Korea Trade Promotion Agency (KOTRA) were launched. KOTRA took charge of building overseas networks, helped the marketing activities of domestic firms, and collected market information.

Exports as a proportion of GDP rose from 5 percent in 1963 to 28 percent in 1973 (Figure 2-2). International trade is known to produce multiple benefits. 5) The question is whether various schemes introduced in the mid-1960s were really helpful in promoting exports. Kwang Suk Kim (1994, p.326) notes that they did not raise financial gains for exporters much. Even before the exchange rate reform, exporters could convert their foreign currency earnings into domestic currencies at market rates through the foreign exchange deposit system. Devaluation of the won therefore did not suddenly increase exporters’profits. The total amount of various subsidies to individual exporters was also similar in the 1950s and 1960s. Jones and SaKong (1980, p.96) propose other reasons for the rapid growth of exports. According to them, “the most important cause for the change was probably the reduction of alternative higher-yielding sources of entrepreneurial income. If you can make 100 percent in afew months with little risk, through privileged access to foreign exchange, there is little point in devoting effort to the difficult and complicated task of exploring export markets and putting together internationally competitive productive combinations. The exchange rate reform closed out the zero-sum sources of rent, reduced opportunity costs, and drove rent-seekers into productive positive-sum activity.” They also note that other factors such as the decline in exchange rate variability and the commitment to growth by apolitically stable government must have played an important role in creating afavorable business climate. 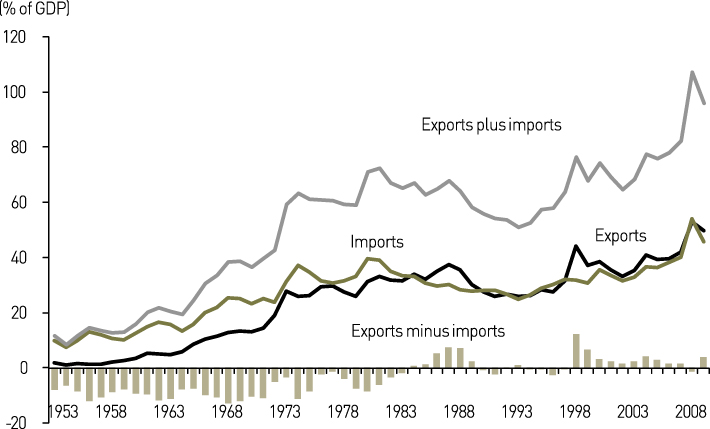 1) They abandoned the Financial Stabilization Program and adopted expansionary fiscal and monetary policies in the first two years of the first Five-Year Economic Development Plan (1962-1966). They carried out a currency reform in May 1962 to mobilize idle domestic capital held by households, but it failed to disgorge the funds. The new administration also attempted unrealistic and wasteful investments in the domestic production of cars and color TV sets, but abandoned the projects shortly thereafter.
2) The reserve fell by half (from 205 to 107 million dollars) in nine months between December 1961 and September 1962.
3) The Korean government reluctantly accepted these devaluations in accordance with the agreement with the U.S. government.
See Chapter 4 for further discussion on export promotion policies in the 1960s.
4) Other measures for export promotion included (3) indirect tax exemptions on intermediate inputs and exports, (4) direct tax exemptions on exporters (abolished in 1973), (5) wastage allowance for imports of raw materials, (6) registration as an importer conditional on export performance, (7) tariff and indirect tax exemptions granted to domestic suppliers of exporters, and (8) accelerated depreciation of fixed assets in major export industries.
5) First, international trade enhances the division of labor as countries specialize in their areas of comparative advantage.Second, integrated markets enable producers and consumers to reap the full benefits of economies of scale. Third, stronger competitive pressure prompts producers to reduce inefficiencies and invest in productivity-enhancing capital goods and innovation (OECD, 2007, pp.6-7). In addition, exporters from developing countries can gain knowledge of product development,manufacturing, marketing, and other modern practices in advanced countries (Je-min Lee, 2001, pp.493-495). The knowledge gained is subsequently disseminated to other parts of the economy, leaving positive externalities